Who is Chen Dapeng?

Chen Dapeng was born in the beautiful Island City of Gulangyu, Xiamen in Fujian province of China in the year 1945.

Chen is an eminent master of Jian ware, who has played a pivotal role in the revival of the ancient art of the Song dynasty. His great contributions were duly acknowledged by making him an esteemed member of the Chinese Ancient Ceramics Research Association. He has also been conferred with the title of Chinese National Craftsman.

Chen has been invited to participate in a number of foreign Tenmoku Ceramic Culture Exchange Conferences. His artwork is eagerly awaited and collected by art connoisseurs from the United States, Japan, Britain, Malaysia, Australia, Singapore, South Korea, Hongkong, Taiwan and Macau among many other countries.

Chen Dapeng has spent 40 years of his life in groundbreaking research and extensive study of the ancient porcelain craft of the Song dynasty. His efforts with the Chinese cultural department have been critical in restoration of the lost art as the nation's top art collection.

30 years ago, the pottery artist Chen Dapeng became famous throughout China, due to his study into the oil droplet ceramics of the Song Dynasty.

In order to truly understand how popular Chen Dapeng has become in the 1980s, one can look at the many articles that were published in the newspapers of the time.

At the end of this article, it was written that 'On the road to self-study, Chen Dapeng grew from an apprentice to a famous ceramic master. He was praised as one of the two pottery artists in Fujian by domestic experts and scholars. Now he is hired as a national craftsman and enjoys the treatment of engineers.'

From this article, it is clear that Chen Dapeng had gained a nationwide reputation 30 years ago for his achievements as an artist and expert in ceramics. 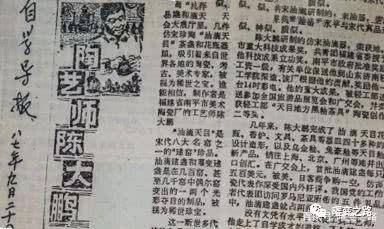 What did Chen Dapeng do?

From a young age, Chen Dapeng was interested in ceramics. When he was thirteen years old, he became an apprentice at the Nanping No. 2 Ceramics Factory, and often went to the kiln site to find tiles. By chance, he discovered a piece of the black-spotted silver tiles. It caught Chen Dapeng's interest, and he spent a long time studying it. Although he often configured glazes in ceramic factories and was very familiar with the burning methods of different porcelains, he couldn't figure out the process behind these oil droplets.

Towards the end of 1978, Chen Dapeng began trial burns, collecting soil from all over Fujian Province, including Shuiji, Chayang and XinDian. He also tested numerous different formulas to create glazes. Throughout this year, he studied the oil drop of the Song Dynasty in an attempt to recreate the oil droplets. The burning method was studied basically.

At the same time, as a result of China's Economic Reforms, China began to pay attention to the study of ancient kiln technology. Chen Dapeng's research on the oil-filled construction of the Song Dynasty also received support from the relevant research institutes of Fujian Province and the Chinese Society of Ancient Ceramics. All of these units became involved in the restoration of oil drop construction in the Song Dynasty.

As a result of this financial support and continued hard work, Chen Dapeng was successful in his endeavours. In the end, the Song Dynasty oil drop was officially reappeared in 1981.

In June 1984, a study by the Nanping Research Institute in Fujian Province confirmed that the oil droplets burned by Chen Dapeng reached the level of the kiln built in the Song Dynasty.

The average price of a Jian ware in 1984 that was sold to regions outside China was $500.

Over the years, Chen's works have won numerous awards at different levels in various forums. Some of his prominent achievements are given as under:

1. The Jian ware Oil-Drop Black Glaze Porcelain Development project got through the provincial appraisal in 1983. In the same year, it won the 1st prize at the City's Scientific and Technological Achievements as well as the 2nd prize at the regional level competition.

3. The Jian ware Song Oil-Drop Black Glaze Project bagged the 1st prize in Jianyang at the district level in 1988.

5. His imitations of Song and Silver Rabbits black glaze and Fangkous won the provincial ceramics competition along with the outstanding creative design award in 1990.

Chen has the distinction of winning loads of honours for his unique imitations of the Song dynasty's artwork. He has perfected the craft through sheer dedication and hard work. A few of his accomplishments are :

1. Two of Chen's imitation porcelain works were presented to foreign delegates as National gifts by the "Party Workers' Delegation" of the Central Party in 1984.

2. The Oil Black Glaze porcelain was selected to participate in the China Ceramics Expo and the Japan Tsukuba International Expo in 1985.

3. The National Science and Technology Commission took the Oil-Drop Building products as gifts while visiting abroad in 1987.

5. The Organization Department of Nanping City Communist Party of China awarded Chen's products with the honorary title of the Top Level Professional Technological Top Talent in 1990.

6. His works like "Oil Drum Bowl" and "Fruit Spots" featured in the China Contemporary Ceramic Art Exhibition in 1997 and were collected by the Ministry of Culture of the People's Republic of China.

7. In 1999, the Oil-Drop product, "Horn Bowl" made it into the China Modern Ceramic Art's 2nd edition that featured an exhaustive collection of Chinese modern art.

8. Chen had the honour of representing China in the international joint venture of Japan Broadcasting Association and the Asahi Shimbun, the China-Japan Ceramic Exchange in 2001.

9. He was invited to participate in the World Salary Meeting held in Aomori Prefecture, Japan in 2002 and his works were permanently collected.