Pei Chunyuan
one of the world famous
Jian ware artists

Pei Chunyuan is the vice president of the Jian Kiln Association of the Jianyang city in the Fujian province of China.

He's one of the representative inheritors of the Intangible Cultural Heritage of Fujian province.

Pei has spent 15 years of his life researching technologies and artwork of the ancient Song dynasty. He has played a critical role in rejuvenating the Song dynasty's potteries like colourful teapots etc. Through his hard work and persistent explorations, he overcame numerous difficulties and revived the vanishing skills and technology of Song culture to create many artistic masterpieces.

Pei Chunyuan grew up in Jianyang among the ruins of the Jianye site carrying out his investigation on the porcelain fragments. The site is filled with piles of deposits spread over a huge area of about 100,000 square meters. Pei has been sifting through these enormous deposits for years to gather useful information about Song dynasty's pottery skills and processes. He has attained mastery in the Song pot making due to his passion in the antiques since early childhood. 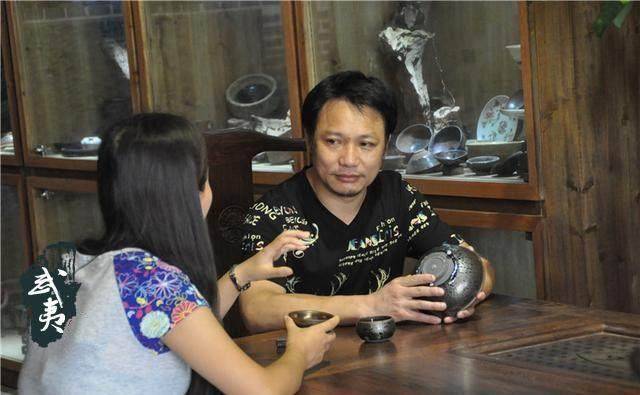 In the 90s, Pei Chunyuan started off as a merchant dealing in antiques accumulating cultural artefacts. His collection includes bronze utensils, calligraphy relics, paintings among others. His love for ceramics was sparked during this time as he realized that the art of Jian ware was diminishing and the people were losing interest in this amazing classical craft.

In order to pursue his passion, Pei Chunyuan studied ceramic production and completed his degree in Longquan Celadon under the legendary masters Zhang Shaobin and Liang Guilu. His love for the art took him to Jingdezhen, the famed hub of ceramic production.

With great zeal and dedication towards the studies, he accomplished newer levels of craftsmanship. He started firing at a time when there were only a few others in the industry in the entire town in Shuiji.

His proficiency in Celadon making almost developed a sense of overconfidence in him, which made him underestimate the complicity of Jian ware production.

However, he soon realized that the insightful artists of Song dynasty followed 13 major steps including over 100 minor processes to produce a masterpiece. Failure of even a single process meant a defective product, which could only be discarded just like loads of broken porcelain pieces dumped near the dragon kiln.

The level of difficulty can be gauged from the fact that even a passionate and committed artist like Pei also decided to quit many a time.

However, his desire to learn and perfect the skills of the Song dynasty kept him going and he surpassed all challenges to ultimately become a master in the art form.

Pei Chunyuan also consulted Mr Chen Dapeng, a stalwart from the second porcelain factory in the 80s. Pei made remarkable contributions towards solving the issues of blistering, glazing and deformations, which led to numerous other technological advances.

Pei Chunyuan's career as a Jian ware artist has been acknowledged by connoisseurs and critics through several awards conferred on him. Several museums in Fujian as well as abroad have gathered his products.